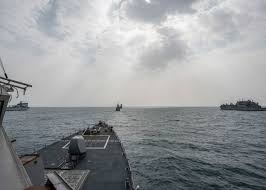 In 1971, the war was on between India-Pakistan, and who was knowing that this war will be marked as the Greatest Victory of Indian Navy, in the history of the Indian Army.

From the time India got freedom from the British Rule, the navy force is continuously working for the security of country’s coastal boundaries and it’s a pride for us that we have a strong historical event to celebrate the adventurous courage of our marine sharks had carried out.

The operation Trident and determined efforts that helped India for winning the 1971 INDO-PAK war, was a well co-ordinated and strategized move supported by Indian Airforce Team as well.

Among the India -Pakistan tensions, the Pakistan Aircraft suddenly on the evening of December 3rd,1971 attacked the 6 Indian Airfields. Soon after that war was declared and a special group of Indian Navy was formed to undertake the strike for destroying the Pakistani Navy’s Headquarter and the primary sea-trading Pakistani hub-Karachi.

Previously the Navy Day was celebrated as killer day. The reason behind this was the result of this operation. The Indian Navy planned to strike Pakistan in the night, and the Pakistani army does not have aircraft that can support them in night time.

On the other hand, India had 3 Vidyut missile boats, 2 anti-submarines and a tanker. In the night around 2 pm on 4th December, the Indian navy team traveled to Okha Port in Gujarat, from where the distance to Karachi from south was 40 miles. And near 10:30 pm, the Indian Marine Sharks were ready to take action against the Pakistan’s navy force.

Around 10 pm, one of the lieutenants saw INS Nipat’s radar alarming and indicating that two enemy warships were entering our border. The team informed to other groups and then after INS Nirghat fired two missiles at Pakistani destroyer PNS Khaibar and sunk the same. In the intervening period, the INS Nipat fired missiles other warship of Pakistan and sunk the merchant ship MV Venus Challenger, which was loaded with ammunition for the Pakistani army and air force.

Then the INS Nipat without wasting time headed towards another attack, targeting to destroy the OIL DEPOT in Karachi Harbour, that was kept for facilitating the oil storage for Pakistani Navy force. As the Pakistani navy approached further, INS VEER fired its first missile on Pakistani Mine Squad- Muhafiz and sunken it with entire crew.

With the successful accomplishment of mission, the Indian Marine Sharks our Indian Navy Army headed back to the Indian port of Mongrol. While returning from Mongrol to Mumbai, one of the sailor climbed up at the missile hanger-on INS Nipat and using the red paint wrote “Killer.” The squad was recognized as Killers and since that day 3rd December is celebrated as “The Killer Day.”

The best part of this war was Indian Navy destroyed 5 Pakistani sailors with injuring around 700 men, BUT WITH NO INDIAN CASUALTIES.

Today our Indian Navy Force is more improvised, trained and are using modern techniques and types of equipment, modern ships and submarines and are safeguarding our marine boundaries.

It’s said fire and water don’t show mercy on anyone, But our Indian Navy Soldiers are living in ships for days, months even for years risking their lives for the sake of securing our nation from enemies. Many soldiers who lost their lives while performing their duty and even their body were never found and their families couldn’t see them for the last time. The act of bravery and sacrifice of Navy Soldiers could not be forgotten and tribute must always be shown and given to them and their families.